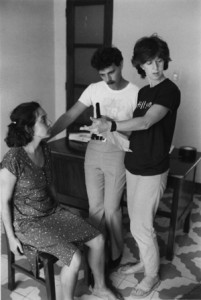 Jacqueline Levitin is a Filmmaker/Media Artist, and an Associate Professor in the School for the Contemporary Arts and the Gender, Sexuality ad Women’s Studies department at Simon Fraser University in Vancouver, Canada. Prior to that, she taught Film at Concordia University in Montreal.

Jacqueline was born in Seattle, USA, and lived in Israel and France before moving to Canada in the mid 70s. Her graduate work includes a M.A. from the University of Washington, and a Ph.D. from the State University of New York at Buffalo, with a thesis on the work of Jean-Luc Godard.

Her work as a filmmaker of experimental fiction and documentary has shown in festivals in North and South America, Europe, and Asia. She has collaborated on dance and theatre projects, and more recently has combined film and social engagement in participatory websites. Jacqueline has also published in the field of cinema, with a special emphasis on women’s filmmaking. She has lectured abroad as a film scholar. Jacqueline is co-editor of the popular Women’s Filmmaking: Refocusing.

She has received numerous financial awards for her filmmaking and scholarship.